On May 25 a female Giant Anteater with a weight of 1570 gram is born in the Zoo Berlin. Her mother is the 17 years old female “Griseline” and this baby is already her 5th baby. The little she was named “Evita”, because “E” is also the 5th letter in the alphabet.

Because the last time “Griseline” had not enough milk to raise her youngsters, the animal keeper decided to give “Evita” 3 times a day additionally a milk bottle. This is a not so easy business because of the thin, long snout of anteaters. Besides the keeper has to be also a bit cautious because of the long, sharp nails of the anteater baby, which it will use later in her life to dig for her main food, ants and termites. Of course the keepers succeeded to give “Evita” additional to her mother’s milk some extra portions by the bottle and within 3 weeks “Evita’s” weight gains to 2,5kg. Now she is strong enough to ride on the mother’s back, as it is the normal behavior of anteater babies. 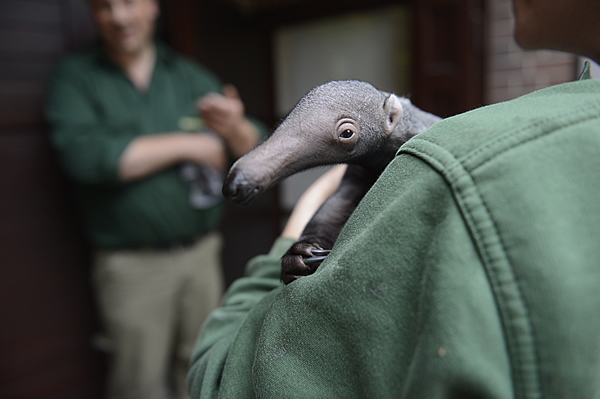