Only 30 years ago the transport of free swimming sharks was still a problem. Therefore at that time, inland aquariums like the Zoo-Aquarium Berlin kept only ground sharks like dogfish and nurse sharks. When the first Black-tipped reef sharks arrived in Berlin in 1987 it was a real sensation and all the German media reported about these sharks in Berlin. 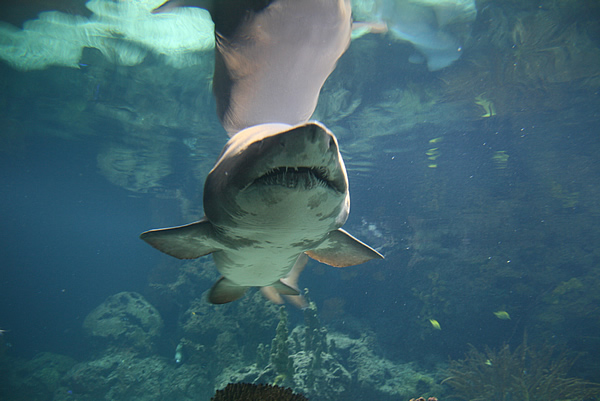 Another 10 years later it was no longer a problem to transport even quite large sharks and also species, which are not so easy to keep. Also the Berlin Aquarium kept now many different shark species like the wobbegongs, leopard and zebra sharks and in 2006 the first sandtiger arrived from the zoo in Leipzig.

This female sandtiger has never seen the open ocean, because it was saved by a German animal dealer, who found the not yet born, but still living young shark in the body of the killed mother shark on a fish market. After a short stay in the dealer’s export station, the young sandtiger, named “Nikki”, was transported to Germany, lived some time in the dealer’s aquarium in southern Germany and was finally sold to the Leipzig Zoo. The sandtiger “Nikki” arrived on December 17, 2002 in the aquarium of the Leipzig Zoo. “Nikki” measured at her arrival in Leipzig 135cm and she had a weight of 40.5kg. She was kept in the larger ring aquarium in the annex building of the traditional Leipzig Aquarium. She lived there peacefully together with some other smaller and larger coral reef fish. Of course she had to be fed quite often that she did not became too hungry and would prey on the other fish. On the other side she should not grow too fast, because this ring aquarium is not too big and especially the distance between the acrylic pane and the aquarium-wall is rather limited. For about 3 years this coexistence worked quite well and “Nikki” grew up onto 152cm and 63kg. Now she became slowly too big for the aquarium. Besides suddenly she decided to eat in the night some of the fish in her tank. Therefore she was transferred to the Zoo-Aquarium Berlin on March 15, 2006. 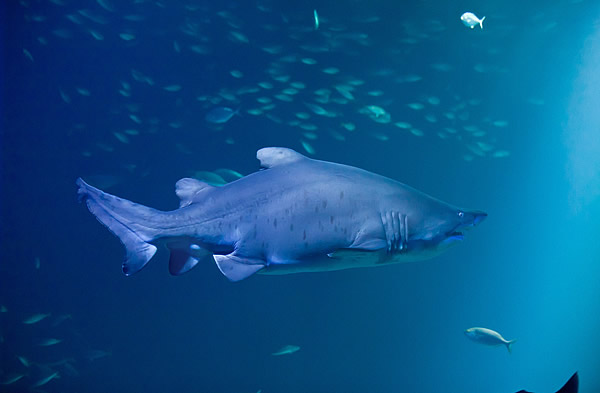 Very quickly “Nikki” became the favorite of the aquarium keepers, but also of the visitors. She became the background mascot for many photo shooting and TV film sessions. Here in Berlin she lived in a 100m³-tank together with some nurse sharks, Black-tipped reef sharks, Green Moray eels and small coral reef fish. In this tank she had the chance to grow and she did, because she was a good feeder. “Nikki” was growing and growing and became really a nice, impressive sandtiger.

But at the end she became also too big for the tank in Berlin. Therefore the staff of the Zoo-Aquarium Berlin decided to offer “Nikki” to the new ocean aquarium (Ozeaneum) in Stralsund, a city in northern Germany at the Baltic Sea. Of course Stralsund was pleased to get “Nikki”, because she was at that moment already such an impressive shark, which is rather difficult to import and to transport over larger distances. 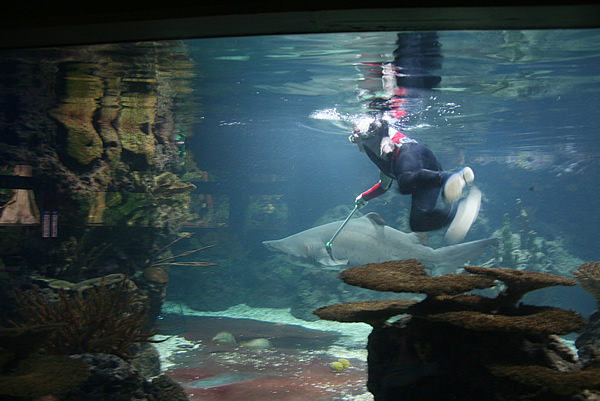 After 6 years in Berlin, on February 6, 2012 “Nikki” left her home in Berlin and moved to Stralsund. At this moment “Nikki” was 200cm long, 70cm high and weighted about 200. Nowadays in Stralsund, she swims in a large tank containing 26.500m³ of water. There she feels very well and is still growing. In the spring 2013, I visited together with Tai-san, the editor of this magazine, “Nikki” in Stralsund. We both were happy to see her there in a very good condition, because we still have many memories of her during her time in Berlin.